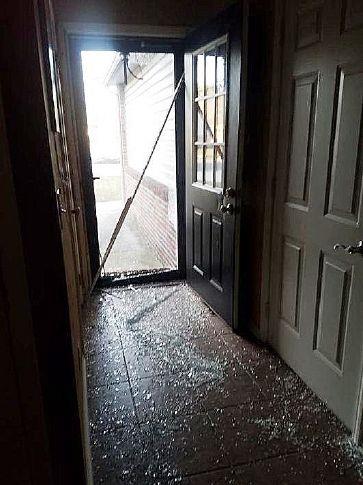 Deer makes itself at home

NORWALK — Theresa Fisher and Bob Barker were relaxing about 5:15 p.m. Thursday when they heard a crash.

“The front doors were both open and there was a deer trying to get up off the kitchen floor,” Fisher said. “She was running around and she ended up going into the guest bedroom and I shut the door so she’d stay inside.”

The outside glass door was completely destroyed and the steel door was locked when the deer forced it open. The door frame was damaged and there is a large dent on the steel door.

“She had to be running really fast because the steel door was locked and she came right through it,” Fisher said. “We were just sitting here talking and didn’t even see her at first. By the time she got off the floor, we were like, ‘Oh my God, there’s a deer in our house.’”

Fisher said the event was “insane” and something she never expected to happen.

Fisher and Barker called the police after the deer crashed into their home.

“(It) was inside making a racket, knocking at the window and trying to get out. She was having a heyday in there,” Fisher said. “We kept her in there until the police could get here. Everything’s all over the floor, there’s blood all over the walls and everything.”

Fisher said five Norwalk police officers came and formed a human chain to lead the deer back outside.

“The police were great. They had a plan and figured out their best options and took control of the situation,” she said. “They moved our furniture out of the way. (They) made it so the deer didn’t have an option but to go out the front door. (The police) kind of lured her out and she took off running through the house and went right back out the front door that she destroyed and was gone.”

She said police came back to her house Friday to clean up the glass and blood.

“They did a really good job cleaning things; we’re waiting now to get the doors replaced,” Fisher said. “We’re just trying to get things back to normal.”

Fisher said Friday that any noise she hears inside has made her jump.

“You hear any noise and you think something else is happening,” she said. “It’s not a big wide open area. It’s so strange that she just ran and it happened to be through our front door.”

Fisher said she feels lucky no one was hurt during the incident and they were home.

“If we wouldn’t have been home, she could have destroyed the entire house,” she said. “It was crazy.”