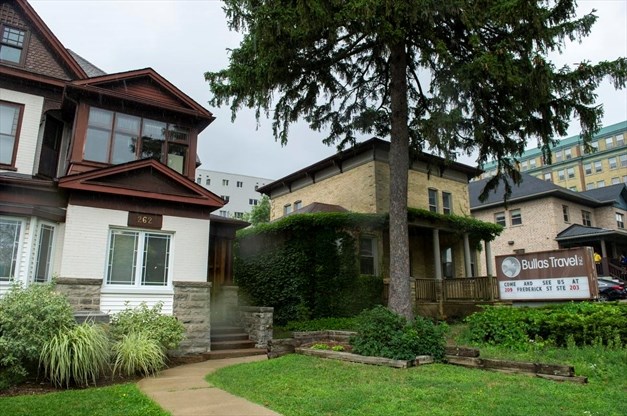 Kitchener votes to save heritage homes on Queen Street

By admin
Posted September 26, 2019
In glass repair and replacement
0
0

Vive Development Corp. had applied for permission to demolish the two heritage homes, at 254 and 262 Queen, as well the Oneroof youth shelter at 242 Queen St. S., built in 2007. The house at 262 Queen was built by prominent early industrialist C.A. Ahrens.

The developer had hoped to build an eight-storey, $22-million, 125-unit rental apartment building on the three adjacent lots.

The vote came almost a year after council reluctantly approved the demolition of two heritage homes further down Queen Street, next to the Schneider Haus National Historic Site.

Mario Chilanski, who lives in the Victoria Park heritage district, reminded council of that earlier vote, quoting councillors’ comments from October 2017 when council insisted that the demolition of the homes next to Schneider Haus would not create a precedent or send a signal that the Victoria Park district was open for demolition.

On Monday, councillors weighed the desire to protect a shrinking supply of heritage homes along Queen Street against arguments in favour of increasing the supply of downtown rental housing — as opposed to pricier condos.

Vive argued that the development would make a major contribution to the supply of rental housing in the core, which has seen a flurry of condo proposals, but only 50 new rental units in the past four years. Heather Campbell of Vive said the development is aimed at households with a yearly income of $40,000 to $78,000, with rents around $1,550 a month.

Retaining the two heritage homes would reduce the total number of units in the development, pushing average rents up to about $2,175 a month, Campbell said.

But council’s decision means Vive will have to come up with a plan that retains the two homes if it wants to develop the site.

Vive and Oneroof had reached a conditional agreement of purchase, said Oneroof chief executive Sandy Dietrich-Bell. The agreement included a commitment to set aside three affordable housing units in the new development for the youth that Oneroof supports. That agreement is in jeopardy, since it was conditional upon council’s approval Monday, Dietrich-Bell said.

“Three units might not seem like a lot to you folks, but it’s three more than we have today,” Dietrich-Bell said. Affordable housing units that are reserved for youth are “non-existent” in the region, she said.

She was joined by housing advocate Lynn Macaulay, who acknowledged the Vive apartments were aimed more at the middle of the market, but said more rentals would help ease the desperate housing supply crunch. “We are running out of units (in Kitchener),” she said. “We need to create rental stock at all price points. When we have a stronger mix of rental housing it helps to keep the price contained.”

Kae Elgie, a former head of the North Waterloo branch of the Architectural Conservancy of Ontario, said the two heritage homes had value, not just because they helped tell the story of how early industrialists built homes close to their factories, but because the homes themselves had merit and beautiful features, such as stained glass windows and original fireplaces.

But others told council the homes, owned by Vive, were a decaying eyesore without much heritage value. Tatjana Sabados lives across the street at 253 Queen St. S. and said the homes are in “slow decline. We wake up every morning to see the homeless and other vagrants sleeping, loitering and leaving a mess. This is all day, every day.”

Council heard from 13 delegations on the issue, which took up more than 3 ½ hours at Monday’s city council meeting. It was almost 1 a.m. Tuesday when councillors finally cast their votes.