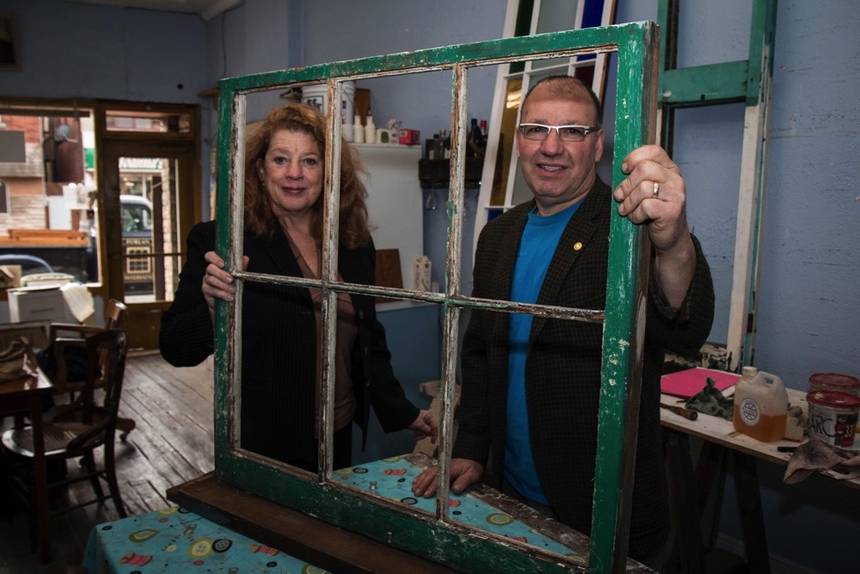 Tell those replacement window salesmen to go away; fix your old window instead.

One of the first things many people do in a renovation is change the windows. For years, historic preservation groups like the National Trust for Historic Preservation have tried to show that this was an aesthetic and environment crime. I have railed on against the lying replacement window manufacturers with posts like If I See Another Full Page Pella Window Ad I Am Gonna Scream. We have discussed studies that showed that the payback period for replacement windows can be as much as 250 years.
But now a new study headed by Shannon Kyles, Instructor at Mohawk College in Hamilton, Ontario, settles the question once and for all. Her team built a tiny house, 12 feet by 8 feet, with two new windows and two restored 200-year-old windows and tested them for air infiltration (the biggest source of heat loss with windows). “The test results demonstrate that there is no difference in air infiltration between new windows and restored pre-war windows.”
Some modern windows (like those designed for passivhaus use) are really energy efficient and airtight with special glazing, gases and coatings. However, the majority of North American replacement windows are not engineered to such high standards. There has long been a debate, particularly in historic preservation circles, about whether old windows, particularly in century-old buildings, should be replaced or repaired. Shannon’s study shows that restored windows can do the job.

There are lots of reasons to save old windows instead of buying new. There is the aesthetic, as noted by the National Trust for Historic Preservation:

If you had a beautiful piece of art that was custom designed, crafted by hand, made from native old-growth wood, and imbued with clues to its age and crafting traditions, would you throw the authentic piece in the dumpster if a simulated plastic version suddenly became available? Seems ridiculous, right? However, this is precisely what people all over the country are doing when they rip out their historic wood windows and replace them with new windows.

Then there is the embodied energy saved, the energy that it takes to make the new replacement window. Shannon writes:

An existing 200 year-old window essentially consists of wood and glass with paint or varnish. The energy needed to restore it is minimal. Comparing this to a new window, one must consider first the embodied energy required to extract raw materials to produce the new product, then the direct energy used to remove the existing window and dispose of it in a land fill. More direct energy is needed to then take the new window to the building.

Then there is the issue of the longevity of new replacement windows. As Donovan Rypkema has noted: “That is why they are called ‘replacement’ windows; you have to replace them every 30 years.”

But then there is the big question: do new windows actually save energy? Shannon and her team built the tiny house and installed four windows.
Two 1830s Georgian windows were purchased. One was restored by Furlan Conservation in Hamilton, Ontario. The other was restored by Paradigm Shift Customs in Brantford. Two new windows were purchased from Pollard Windows. One was a wooden sash window. The other was a vinyl casement. All four windows were installed by John Deelstra, Professor of Carpentry at Mohawk College. All windows were installed with foam insulation. To make a complete comparison, other considerations including ease of opening and access to air circulation were also considered. The restored windows had opening windows and storms that were hinged so that no lifting or access from the exterior was needed for air circulation.