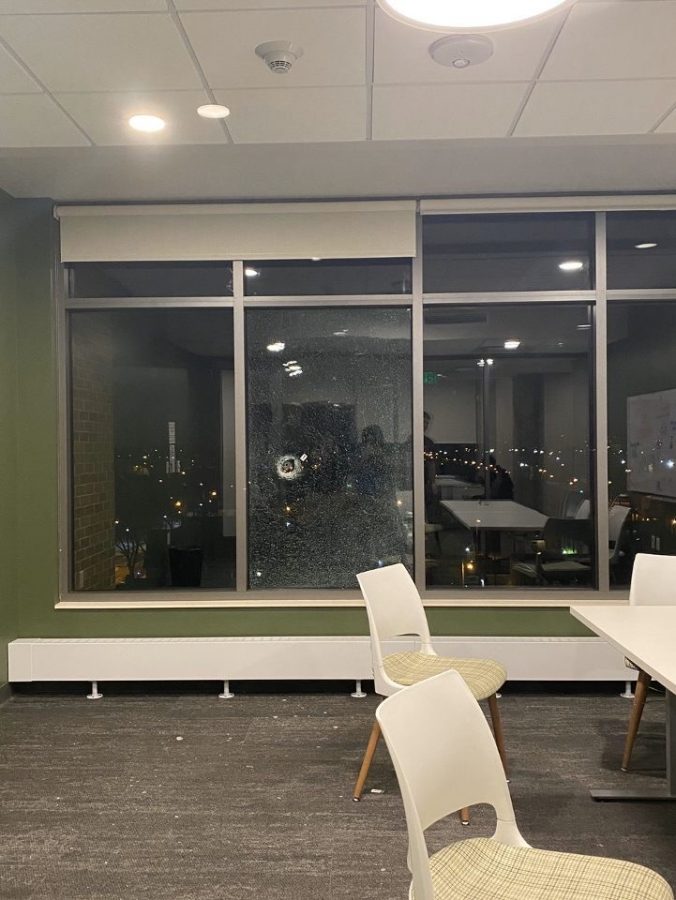 A bullet entered the eighth floor window of a study room in Wells St. Hall in The Commons residence hall Sunday shortly before midnight, according to a Marquette University Police Department safety alert.

No one was injured in the incident. The shooting happened between two cars near N. 17th Street and W. Highland Ave., which is less than half a mile from The Commons. Wells St. Hall runs parallel to 18th and Wells streets and houses nearly 500 undergraduate students.

“I heard a big boom and instantaneously the glass shatters,” Tyrrell said.

When he realized the noise came from a bullet, Tyrrell said he told the other student, and four additional students who were in an attached common area, to get on the floor.

“I was just shocked,” Tyrrell said. “I never expected myself to be in that situation.”

Jacquelyn Carter, a sophomore in the College of Communication, said she was in the study room a couple of minutes before the bullet entered. She said the initial reaction to the shooting was chaotic, with residents keeping away from windows by standing in the hallway.

Students, including Carter and Tyrrell, called their parents to tell them they were safe.

“I did start crying a little bit — a lot of us did,” Carter said.

Tyrrell said he stayed up until nearly 4:30 a.m. Monday morning, unable to sleep. He talked on the phone with his sister, who attends another university.

“I was shaking,” Tyrrell said. “I had adrenaline in my body.”

According to the alert, MUPD and resident assistants checked on all residents on the affected side of Wells St. Hall and confirmed no injuries. MUPD Assistant Chief Jeff Kranz said students in the residence hall were worried about the incident, but MUPD was transparent with information to ease concerns.

“We’re out there, we’re patrolling,” Kranz said. “I believe this was a random act and that the tower itself was not targeted by the shot.”

Tyrrell added that MUPD and a resident assistant held a floor meeting to discuss the incident with students. He said he realizes the shooting was a “freak accident.”

“Now that I know it was a stray bullet, like what are the odds of that happening?” Tyrrell said. “It’s probably never going to happen again.”

When police arrived, Tyrrell said he noticed a fragment of the bullet on the ground in the study room, and he saw a mark on the wall where the bullet may have struck. Carter said crews worked to replace the window Monday.

The area of the shooting was near university-owned apartment buildings Campus Town West, located at 819 N. 16th St., and Campus Town East, located at 1500 W. Wells St., which both house juniors, seniors and graduate students. These buildings were not affected by the incident.

It is unclear if a suspect was located. Kranz said Milwaukee Police Department did not immediately provide any suspect descriptions. MPD did not respond to requests for additional details.

“I’m still kind of just processing the whole thing. I’m just happy no one got hurt,” Tyrrell said. “It’s something I won’t forget for the rest of my life.”